An Anti Smoking Campaign That Will Scare You 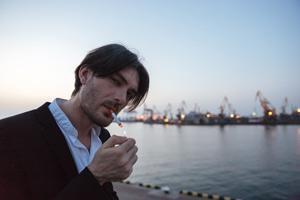 If you want to look scary this Halloween, don’t get your costume from the traditional costume store. Just check out the HealthExpress clinic’s new line of anti smoking materials. ..

This anti-smoking campaign is quite literally in your face. Sometimes, however, people need dramatic examples to shake them out of apathy. These masks may look extreme (I thought they looked more like meth addicts), but they accurately capture what long term smoking can do.

The campaign is based in the U.K. While the U.S. in absolute numbers probably has more smokers, in the U.K. and Europe in general smoking seems to be more prevalent. The NHS greenlit the project to coincide with “Stoptober.”

It took a team of serious prosthetic experts to create these masks. In fact, it took about two months to do. They carved out solid heads, used clay and plaster to build up detailed features as well as liquid latex, and intricate paintwork.

Thus far three of these anti-smoking masks have been produced. Actors will wear them on the streets while handing out fliers and awkwardly encountering smokers.

One mask of a 40 year old man shows a grisly tracheotomy. This type of surgery is often required for throat, neck, and head cancers. It also can be necessary due to severe cases of pneumonia brought on by smoking.

The second mask is especially disturbing. It reveals deep tissue damage caused by throat cancer. The whole front of the neck is engorged with a horrific looking tumor. In real cases, this tumor would constrict the throat, making breathing very difficult.

The third mask is of a 30 year old woman whose defining feature is mouth cancer. Her lips are gravely damaged. Her teeth have fallen out. The heavy tobacco use has caused her gums to recede, leading to periodontal disease.

All of the masks show other, non-fatal effects of long term smoking. The skin is either pale or sallow. Crows feet have formed around the eyes from squinting to avoid smoke getting into the eyes.

There are other details too. In all three the hair is thinning and graying prematurely from added stress. Also, smoking damages the DNA in the hair follicles and limits the blood supply to them.

They have wrinkled and sagging skin from the loss of collagen induced by smoking. Their eyes are sunken and darkened. One of the masks even has smoking related cataracts, which are the main cause of blindness in the world.

These masks are far more terrifying than any Halloween costume out there. Though the campaign is limited to the U.K. right now, it really should expand overseas.

As of 2010, 21% of the population in Great Britain are smokers. In the U.S., the percentage is only slightly lower—19%. Our rates of smoking prevalence varies dramatically based on region. States like California and Utah are as low as 9.1%. States like Louisiana and Ohio, as high as 26.8%.

Over the years, in most developed countries, the numbers have dropped significantly. From 1965 to 2006, the percentage of U.S. smokers went from 42% to 20.8%. Still 19% translates to a lot of Americans. Hopefully this trend will continue.