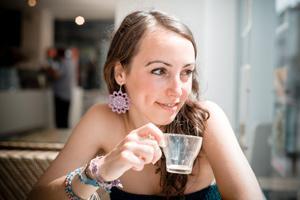 For years dentists have been decrying coffee as bad for your teeth. They highlight how it can stain teeth and how, if sugar is added, it can lead to the proliferation of cavities. Now, however, new studies have been recasting coffee in a much better light. It seems that coffee could actually reduce your chances of tooth decay.

Coffee and Tooth Decay: The Study

Where does this wondrous news about coffee come from? It happened in Brazil, a country known for its flavors of coffee. Scientists at Rio de Janeiro’s Federal University tested extracted baby teeth with an extract from Coffea canephora—a species of coffee bean native to western sub-Saharan Africa that makes up 30% of the world’s coffee.

Using milk teeth, donated by children, the team cultivated biofilms on tooth fragments using the bacteria in saliva samples. They found that the coffee actively broke down bacterial biofilms. It is within these biofilms that bacteria proliferate. The biofilm sticks to teeth as bacteria create cavities through their natural lactic acid fermentation. Biofilm also causes dental plaques, a major cause of tooth decay.

Coffee and Tooth Decay: Why is it Beneficial?

The results found Coffea canephora beneficial in its ability to breakdown bacteria. But why does this happen? The researchers think that polyphenol antioxidants in the coffee were probably responsible for the effect, but said more research is needed to establish a direct link. It is hoped that eventually, the active chemicals could be extracted from coffee and put to use in a mouthwash or toothpaste.

In a separate study, hops from beer were found that a similar effect. Scientists at Tokyo University of Pharmacy and Life Sciences found the leaves contain polyphenols, which can prevent the release of bacterial toxins in the mouth. While the vast majority of hops are used for beer, the bracts from hops are not and they can be utilized, possibly, for extracting the active ingredient that prevents bacteria build-up.

So if you enjoy coffee, go ahead and drink up. Just remember to brush your teeth soon afterwards to prevent staining.

Therapy Instead Of Sedation For Fear Of The Dentist?

Fear of the dentist affects millions of Americans. Sedation dentistry helps many of them, but like some, you may be interested in alternatives.