How Many Licks Does It REALLY Take To Get To The Center Of A Lollipop?

Hillsdale Dental Care Blog How Many Licks Does It REALLY Take To Get To The Center Of A Lollipop? 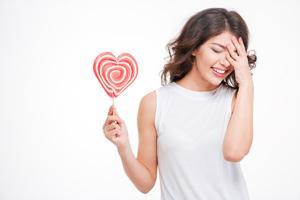 It’s an age old question and one that kids all across the globe have been trying to determine for decades. How many licks does it take to get to the center of a lollipop? If you’ve ever seen the “Tootsie Pop” commercials, you’ve probably tried this yourself! However, your casual experiments have recently been recreated by actual professionals and the results were astounding.

Recently, some scientists at New York University have tried to figure this out and settle the debate once and for all! The main idea for the scientists was to determine the power of the human saliva and the acids we have in our month. Determining these factors first, would make it much easier to predict the “number of licks” accurately.

What results did the study bring?

According to a study performed by the scientists at NYU, the human tongue needs to perform up to 1000 licks in order to successfully melt a single centimeter of candy. But the news doesn’t stop here. In order for us to reach the center of a lollipop, which amounts around 2.5 centimeters in density, we would need around 2500 licks which is significant more than the wise owl in those old commercials!

In order to achieve these results, the scientists placed a variety of lollipops, each one with a different shape and size into slowly moving water, which simulated human saliva. During this procedure, the scientists have managed to see how the flowing fluids generated a variety of shapes as the erosion process was taking place.

The process that lead to this discovery was quite simple, the candy lollipops ranging from 1 to 10 cm were placed into the moving water that had a speed of 0.2 and up to 2.2 mph. This whole process was filmed with high speed and high resolution cameras that managed to fully account the dissolving process with the help of timelapse photography.

Results were quite interesting, as they showed that no matter the shape of the lollipop, the dissolving process was very fast and it managed to reduce 1cm from the diameter of the lollipop each 1000 licks. In addition, the flavoring dyes that were used in each case had very little effect on the outcome. For example, grape lollipops dissolved just as quickly as cherry lollipops.

One of the standout factors of the whole process and the one that actually brings the size reduction is basically the turbulence that is created onto the lollipop from the saliva. Quite simply, the more turbulence of the saliva would create more erosion of the lollipop.

These experiments were not just limited to simply seeing how many licks it would take to get to the center of a lollipop. The same experiment can be used in a much more practical application. The same set-up can help determine how rocks erode along the shoreline which is a topic that has not been fully understood in the geology world.

So what started as a silly experiment to answer an age-old question, it led to some legitimate scientific findings and applications in the real world.