NASA To Grow Plants On The Moon 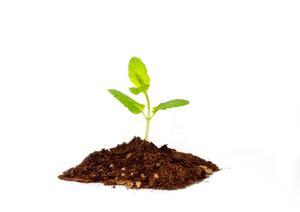 It’s incredible that we landed on the moon given the technology available at the time. Just recall a scene from Apollo 13 astronaut Jim Lovell (Tom Hanks) brags that NASA has a computer “that fits in one room and can send out millions of instructions.”

It’s safe to say that an iPhone completely outclasses the computers used in the Apollo missions. Yet if we’re so technologically advanced, why haven’t we gone back? Or maybe it’s just a matter of when.

Terraforming is the theoretical process by which we would change another planet’s atmosphere, temperature, and ecology to resemble that of Earth’s. It’s a favorite of science fiction.

That said, NASA is planning to do a mini-size (very mini-size) attempt at terraforming. In 2015, NASA is sending a spacecraft to the Moon’s surface loaded with plant seeds to see if they can grow.

Now of course they’re not just digging a hole in the lunar dirt and tossing the seeds in. Instead, 10 seeds of basil, turnips, and 100 seeds of Arabidopsis will be landed in special containers.

Upon landing, a trigger will discharge a small reservoir of water inside the canister. These canisters are packed with all the necessities a young plant requires.

The main purpose of the project—headed by the Lunar Plant Growth Habitat team—is to see if the seeds can germinate in the presence of the moon’s gravity and radiation.

The seeds will be taken up to the moon via the spacecraft Moon Express lander. Currently scientists are working on the kilogram module that will house the seed canisters. Once its touched down, their growth will be monitored for 5 to 10 days.

The milestones that the NASA scientists are looking for are:

In the past there have been experiments with plant growth in space. But that was limited to inside space stations and shuttles. That only tested gravity’s effect, not lunar radiation’s impact.

Hopefully all will go well because this will be a truly landmark achievement. Someday we may have groves of plants under greenhouse glass across the moon. And maybe in the distant future, Mars will have become another Earth…