Tablets And Smartphones Are Killing You!

Hillsdale Dental Care Blog Tablets And Smartphones Are Killing You! 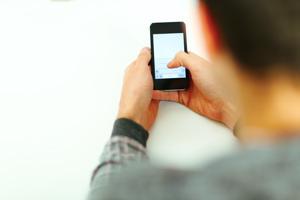 The 21st century will see great advances in medical science. Diseases of the past are being stamped out one at a time. Yet as this is happening, ailments unique to our modern times are beginning to spring up in their stead.

That being said, these ‘ailments’ are hardly serious. Most are the result of our own laziness as we become accustomed to the wonders of contemporary technology. Most of these ailments are more humorous than serious, but they’re all nonetheless very real. The chief vectors for spreading these ‘illnesses’: tablets and smartphones.

While this is also the name of an app that helps you with proper posture, here we mean “iPosture” as the detrimental position our bodies assume when using a tablet. When we use tablets, laptops, and smartphones we tend to hunch and slump over.

Being that the human head weighs 10 pounds, when it tilts forward for a prolonged period of time, it puts a lot of strain on the spine and neck. Considering that the average 18-24 year old spends over 8 hours a day in front of a screen, iPosture has a good chance of becoming the next epidemic for young people.

No it’s not a phobia of pitcher Hideo Nomo. It refers to a psychological dependence on mobile devices. The ‘phobia’ aspect is the fear of losing it and the subsequent anxiety when you’re deprived of your phone.

The symptoms of nomophobia are very much in line with OCD-type behaviors: being unable to turn off your phone, obsessively checking your phone, constantly filling up the battery, and taking your phone to the bathroom. Naturally, the demographic worse affected are those aged 18 to 24. As many as 77% of them are unable to be away from their phone for more than a few minutes.

Here the psychological and the somatic meet. The ailment’s name describes its nature perfectly: it’s the belief that your phone is vibrating or ringing when it’s not. It’s only very natural. We’ve gotten so used to our phones vibrating that our brains make it feel like it is happening when they ‘want.’ Creepy indeed.

Like nomophobia, phantom vibrations are linked to anxiety. It’s comes from a certain anticipatory vigilance that smartphones have instilled in people. The state of being constantly reachable creates a heightened awareness. We’re therefore always on the watch for a vibration.

This is most akin to motion sickness. The 3D shapes that tablets and smartphones depict can cause a disagreement between the human eye and the brain’s perception. What often occurs is that the brain perceives that it’s in motion while the body is clearly at rest.

Because of this mismatch, bodily symptoms can result: nausea, eye strain, and dizziness being most common. It’s rather simple to treat. You can change the phone’s settings, or just look at the horizon or something stationary for a little bit.

So while these aren’t illnesses to lose sleep over, they are growing in prevalence. Luckily, they’re all very treatable if we just change our behavior. Unfortunately, changing our behavior isn’t our best quality.

Unfamiliar surroundings, loud noises, and the close contact that comes with your child’s visits to the dentist can lay the groundwork for dental anxiety. Our goal is to set them at ease, right from the start. And you can help, too.

Straight teeth that line up beautifully do far more than lend themselves to your great smile. There are many advantages for having straight teeth and even more when you straighten them with Invisalign®.

What to Expect With a Root Canal Procedure

You have an infection in your tooth and, in order to save that tooth and ease your pain, we’re going to perform a quick-and-easy root canal procedure. Here’s a step-by-step look at this frontline treatment.