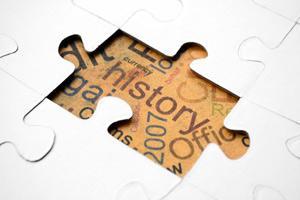 Today is history. One hundred and forty nine years ago, on this day, two men sat down in a court house. Both were career soldiers, graduates of West Point and veterans of the Mexican-American War. Both by now were generals—generals of armies as opposed to pisions or brigades—and both were excellent in their own ways. The general from Virginia was the premier tactician. The one from Ohio was a strategist although often at high cost. Nevertheless it is strategy that wins wars. Tactics win battles and this is why the Virginian found himself surrendering to his Northern counterpart.

Old Appomattox Court House, as it is now called, sits roughly center in the state of Virginia, a little over ten miles east of the James River. In this town, a resident named Wilmer McLean had a house. McLean was no stranger to the war that had been raging for the past four years (about to be five in three days). The war had more or less started on his front yard when the Battle of Bull Run broke out in the summer of ’61, but that was at his old plantation at Manassas Junction in Northern Virginia. He’d moved away because of the war and relocated to Appomattox where he took up selling sugar to the Confederate Army. On April 9, the Confederate Army would call upon him again, but not for sugar.

They came for his house, the Confederate messenger said. The Confederate Army was spent. After Petersburg had fallen in March, Richmond followed suit and General Robert E. Lee retreated with his exhausted army deeper into Virginia, fighting a running battle for a week and a half against the Union’s General Ulysses S. Grant. Now, however, Lee faced the facts. He couldn’t continue the war. He had waged the first truly modern war quite well, considering the South’s weaker economic base and his fewer numbers. But the writing was on the wall and when Mr. McLean reluctantly agreed to host the surrender at his house, Lee found himself across the table from Grant.

Lee dressed immaculately. Grant not so much. First the two talked about their only meeting, back in the Mexican-American war two decades before. Then they got to the point. Grant offered unconditional surrender. That may seem harsh, yet it was the best Lee would ever get. In technical terms, Lee was not an enemy combatant, but a traitor and liable for execution. It was a delicate issue, one that often made surrender awkward in America’s war for independence.

Though unconditional, the specific terms were generous. The Union army disarmed the Confederate one. Southern soldiers could return home, specifically to carry out the spring planting, and Grant provided Lee with a supply of food rations for his starving army. On these terms, Lee surrendered the Army of Northern Virginia, the main Confederate Army. While fighting continued down in North Carolina for a few more days, once the other armies received word of Lee’s surrender, they followed and pisions of men in gray melted back towards farms and homes.

So remember today, April the 9th. It effectively ended the war that claimed 620,000 American soldiers’ lives, still the costliest to date. The war pointed the way to 20th century warfare, towards battles of high explosive artillery, trenches and barb wire. At the moment though, it was a day for peace.